Vatican, bred by Tersk Stud, is a well-balanced and correct son of Kumir (by Mak), who is known for his athletic offspring, out of the world-famous grey mare Nevesta (by Aswan). Vatican holds a large record; both at the race track and as a show horse. For four years he was one of the top racehorses in Russia (4/31(9-6-9))! He was the winner of the most important races in Russia; winner of The Budjonny Prize, Comparison, Closings prize, Entrance Prize, Prize of State Agroindustrial. Amongst his large record of victories are the International Show at Ausburg, Germany as well as the most prestigious race in Warschau, Poland: The Prize of Animex (The Prize of Europe). After he came to Holland he became Regional Champion as well as a Reserve National Champion in 1989.

Vatican has proved to be an outstanding sire. He has many champions and Regional, National, and European winners to his credit! Amongst his famous crop are show winners like Mirok Monpelou, Pasch Vacan, and Vladimir de Falgas. At the European Championships in 1992 as well as 1993 he was the sire of European Champions!

His sire Kumir (2/17(3-4-3); 2nd in the St. Leger and 3rd in the Great Summer Prize) is by Mak (by Korej; 2/16(4-1-2)) out of Kapella (by Proboj; 2/12(3-4-3)). Kumir produced superb racehorses, like: Prikaz (out of Pliaska), winner of all Major Stakes in Russia and Chief Sire at Khrenovoe Stud in Russia, Vatican (out of Nevesta), see above, Deimos (out of Presnia), exp. Brazil. Kumir produced also very good breeding- and show horses like: Pakistan (out of Panagia), sold in the Tersk Holland Sale to UAE, and Pesennik (out of Pesnia), Chief Sire at Tersk (Russia), and Michalow (Poland), later sold to Brazil.

His dam Nevesta is by Aswan (by Nazeer) out of Nagrada II (by Arax). She started 10 times as two year old at the racetrack in Russia (1-2-2). She is the dam of exceptional horses, like: Nezemnaia (by Moment; exported to Holland), Anatomia (by Moment; exported to Holland), Vatican (by Kumir; Sire at Tersk Stud and at the Kossack Stud), Grand (by Mukomol; exported to Holland and was sire at the Kossack Stud), and Naum (by Mukomol; Russia Derby winner, sold in the Tersk Holland Sale to the UAE). In the Tersk Holland Sale in 1993, Nevesta was sold to UMM Qarn Farms United Kingdom/Qatar.

Show and Sport Results of Vatican 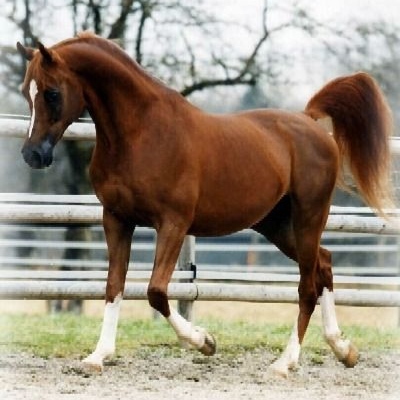